Gauge Rees takes 2 Wins at opening round at Miller

From a Press Release published in RoadRacingWorld.com

Utah Sportbike Association Vortex Masters of the Mountains Round 1 2015

Chilly conditions and mixed weather made for some surprising racing at round 1 of the Vortex Masters of the Mountains race series hosted by the Utah Sport Bike Association at Miller Motorsports Park. Round 1 was held on Miller’s technical East course configuration which provides racers with a little bit of everything including some fantastic overtaking opportunities.

Saturday saw wet conditions all afternoon forcing racers to mount up rain tires to do battle. Young Gauge Rees who is beginning to make a name for himself as a wet weather specialist impressed everyone with his pace in the conditions. He took victory in the Moto2 class with relative ease setting a pace that was unmatched. In the Middleweight Superbike Gauge again took victory but only after being closely chased by Brian Childree for the first three laps. Gauge was able to push even harder and set an amazing 1:47.4 on a cold, wet track stretching out a gap and going onto to take the victory. This would be the fastest lap time of the day, even faster than the best times of the Open Superbike racers.

Sunday begin much how Saturday ended, very wet and very cold. Luckily, the sun appeared midday and by the afternoon the track was dry and the racing was on. The premier middleweight class, King of the Mountain GTU saw a fierce battle between Gauge Rees and Michael Bradshaw with Bradshaw eventually pulling a gap to take the victory. Immediately following was the premier open class race, King of the Mountain GTO. The race began with Jerry Hicks taking an early lead after starting from the second row followed closely by Oleg Pianykh. Lap after lap the two riders grinded out a pace that was unmatched by anyone else on the grid. The battle was building toward what was sure to be a dramatic finale, but on lap 9 Hicks broke a shift rod and was forced out of the race, handing the victory to Pianykh. Bradshaw, who is normally a protagonist in the King of the Mountain GTO race was dropped off the back of the top two riders, surely feeling the effects of back-to-back races, was able to pick up the pieces and take a second place finish. 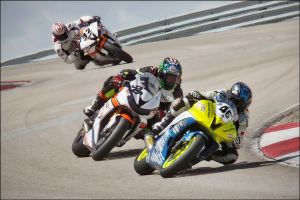